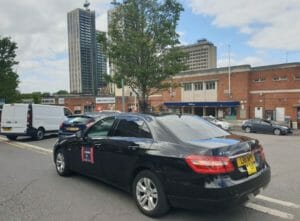 Woking station taxis for £6.00! Taxi from Woking train station for local journeys & airport transfers. Pro Cars Woking is a perfect choice.
Call or book online 24 hours a day, fast and convenient.
Book your Woking Train Station taxis with us to have a smooth journey to your destination.

We can provide a Woking station taxi to the airport or return 24 hours a day. Offering a meet and greet service, which includes a complimentary 30 minute waiting time. We will monitor your flight, allowing a smooth transition to your destination. You can make cash payments to us upon completion of your journey or through our onboard card facility. Alternatively, you can make direct payments to us over the phone or on our online payment service. Enjoy your travel with Pro Cars Woking, the best Woking station taxis & cabs provider.

Woking railway station is a major stop in Woking, England, on the South Western Main Line used by many commuters. It is 24 miles down the line from London Waterloo. It only takes up to 25 minutes from London to Woking station and used by many commuters. It was built and opened in stages, and the first section, between the London terminus at Nine Elms and Woking Common was opened on 21 May 1838. On 4 June 1839, the L&SR was renamed the London and South Western Railway and Woking Common station assumed its current name of Woking around 1843.
Next to Woking railway station will be West Byfleet station, Brookwood station, Worplesdon station and Guildford station.
Pro Cars Woking, the best Woking train station taxi service provider.

Our mission has always been to keep our towns and cities moving safely and efficiently. COVID-19 means we must all find new ways to go about everyday life in a safe and convenient way.

In order to make sure we have an available disinfected car for you A MINIMUM OF 24 HOURS NOTICE is required for online bookings. For immediate or same-day bookings please call 01483 77-35-31

The quickest and easiest way to book a car with Pro Cars Woking is to simply call us. However, if it’s more convenient for you, you may also book via email or by our online booking system. One of our representatives will call you back to confirm your booking.